In support of the international community’s commitment to localize and scale up the implementation of the New Urban Agenda (NUA), the Jeffrey Sachs Center on Sustainable Development (JSC) contributed to and participated in the 9th World Urban Forum (WUF9), held from 7th to 13th February in Kuala Lumpur.

The theme for WUF9 was Cities 2030 - Cities for All: Implementing the New Urban Agenda, a theme that resonates with JSC’s own aspirations to be the leading Center of research and knowledge for cities in Southeast Asia (SDG11: Sustainable Cities and Communities).

The complementarity of the New Urban Agenda and SDG11 provides the opportunity to integrate policies and actions that address multiple urban-related issues; and to develop strategies and plans to realise sustainable cities. Based on this new policy agenda, the Jeffrey Sachs Center shared its work in areas such as education, energy solutions, and social inclusion of children, youth and the elderly.

The Local Pathways Fellowship promotes youth-led urban solutions and highlights concrete examples of how young people are contributing to the implementation of the SDGs and the New Urban Agenda in cities across the globe. Amirah Majid of JSC was invited by SDSN Youth to speak at this event, which showcased the work of program fellows from all over the world that involved projects to localise the New Urban Agenda in their cities. 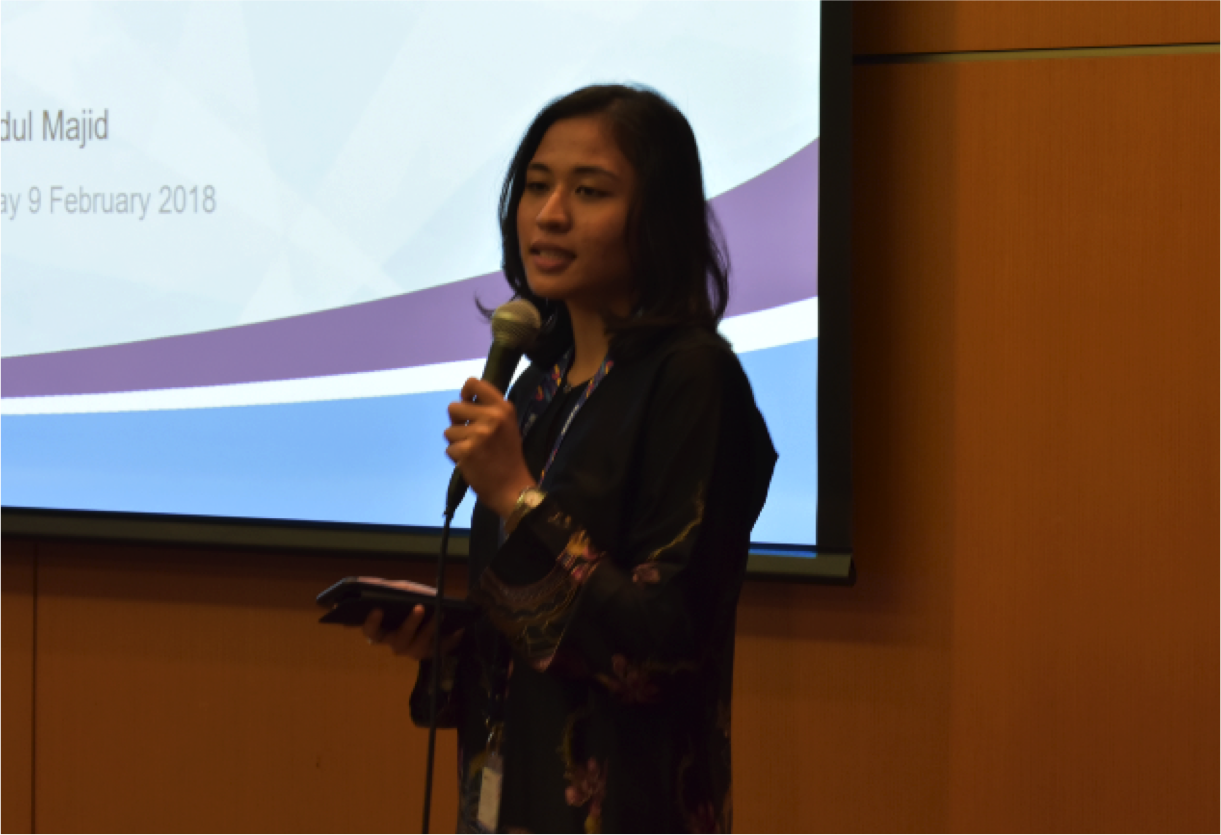 Amirah shared the work of JSC, particularly its youth-centered activities at Sunway University that are designed to equip and guide youth to be co-creators of smart, innovative, inclusive and sustainable cities and communities. These include solutions-based workshops, forums, research and events that promote practical problem-solving at the localised level. To allow youth to take ownership of the Sustainable Development Goals (SDGs), JSC also facilitated the establishment of the Sunway Youth for Sustainable Development (SYSD), a student-led society that champions sustainable development solutions on campus and in the community.

This event was held on 9 February 2018 at the Kuala Lumpur Convention Center.

A Living Lab to Explore Innovative Solutions in Sustainable Development 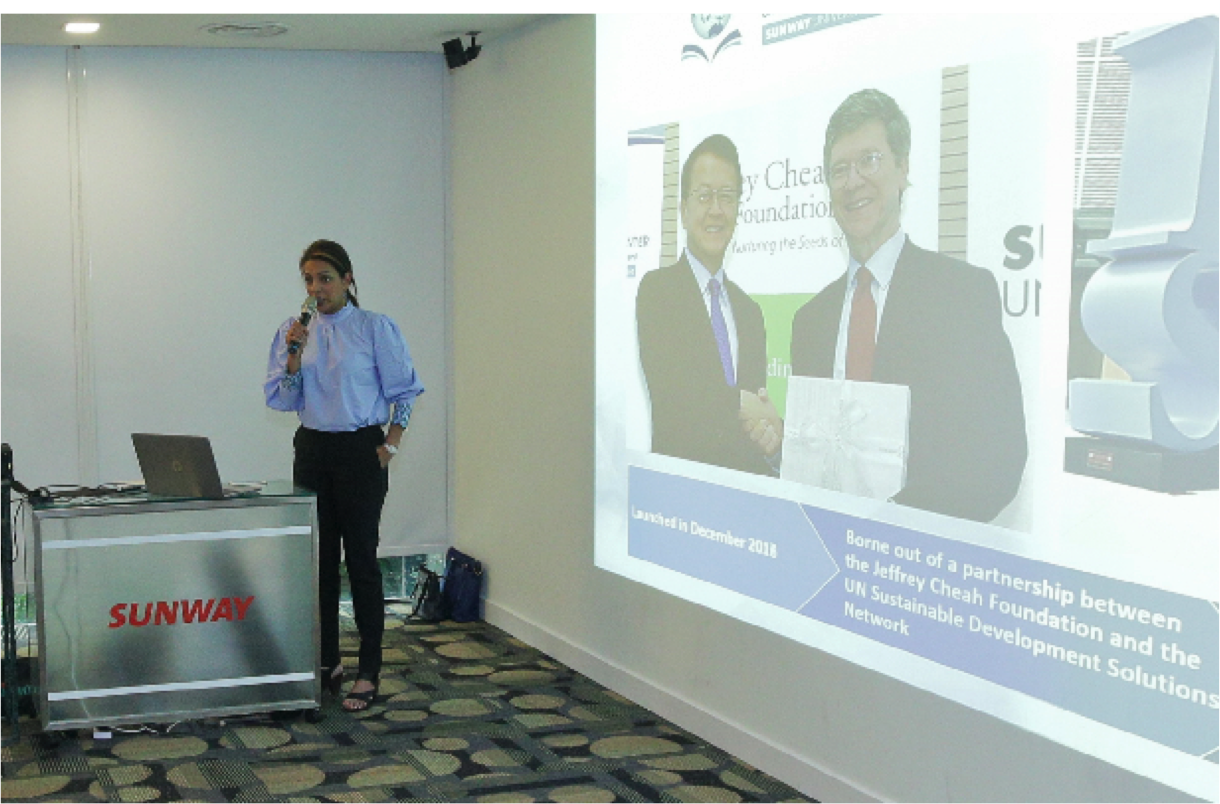 Sunway City played host to two delegations of WUF9 participants on technical visits on the theme of “Urban Solutions and Innovation”. Karen Chand spoke to the delegation about the establishment of JSC, which brought to Sunway the convergence of research and academia that accelerates market-driven innovation and technology, enabling the emergence of solutions to pressing sustainability issues. Karen spoke of JSC’s various research and educational projects as part of “The Solutions Initiative” of the UN Sustainability Development Solutions Network (SDSN). “The Solutions Initiative” dictates that the Center’s work is designed to resolve a critical problem or serve a pressing need. Current projects focus on urban solutions to address issues around energy, mobility and social inclusion, using Sunway City as a living lab. Karen also described JSC’s other research projects on: malnutrition and stunting among Malaysian children; loss of biodiversity; cleanliness and efficiency of the Malaysian electricity system; using big data to address climate change; and the role of rivers, lakes and mangroves in sustainable ecosystems.

Delegates were later able to observe first-hand, via a bus tour, the making of a model 'Smart Sustainable City' of the 21st century, that Sunway developed from what was once a barren mining wasteland.

These technical visits were held on 10 and 11 February 2018 in Sunway City. 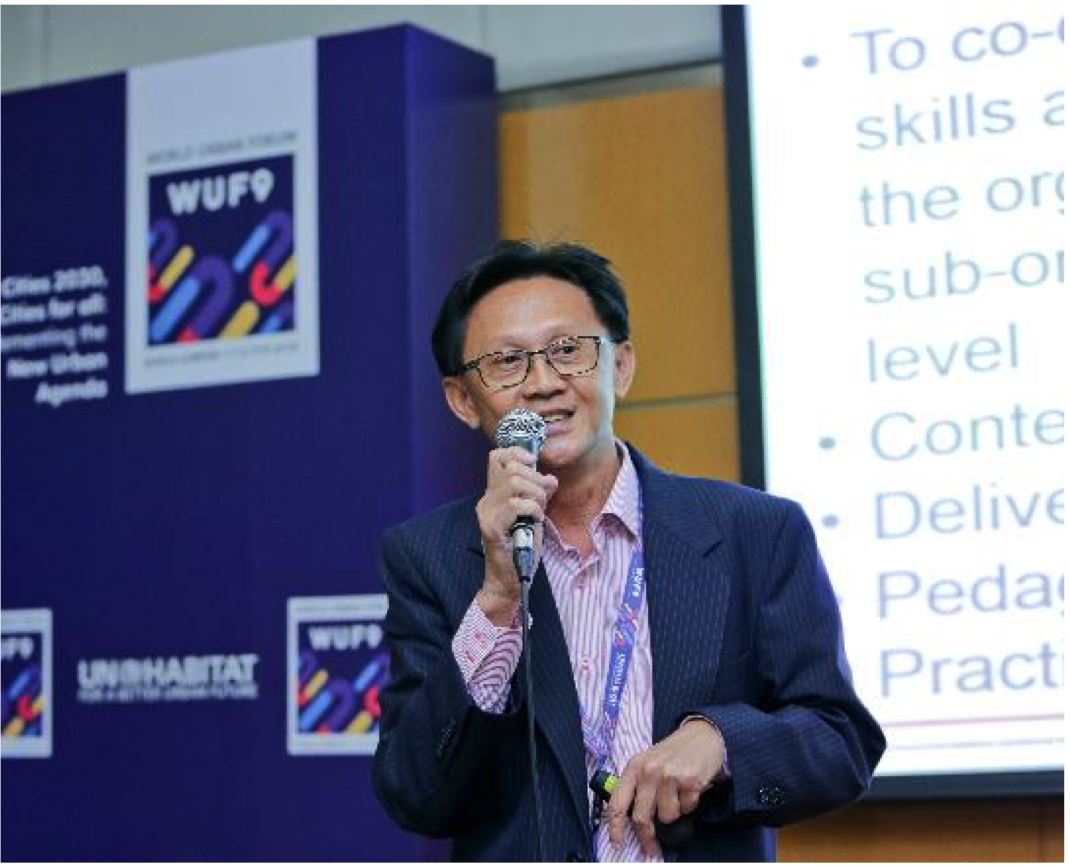 At the Sunway Group networking session, entitled “Sunway City - Wasteland to Wonderland”, Professor Leong Choon Heng presented on talent development for sustainability and shared his experience developing and delivering blended learning workshops using modules from the SDG Academy’s Online Courses. These workshops were first initiated for personnel of the Sunway Group to develop talent and skills to manage sustainability initiatives within Sunway City, inculcating ownership of the sustainability agenda among its various stakeholders.

The content involves the science of sustainability and practical examples that can be adapted to suit organisational needs. He also talked about JSC’s upcoming Master in Sustainable Development Management, which is expected to attract enrolment from the decision-making levels of organisations across ASEAN.

Reducing Dependence on a Carbon-intensive Grid 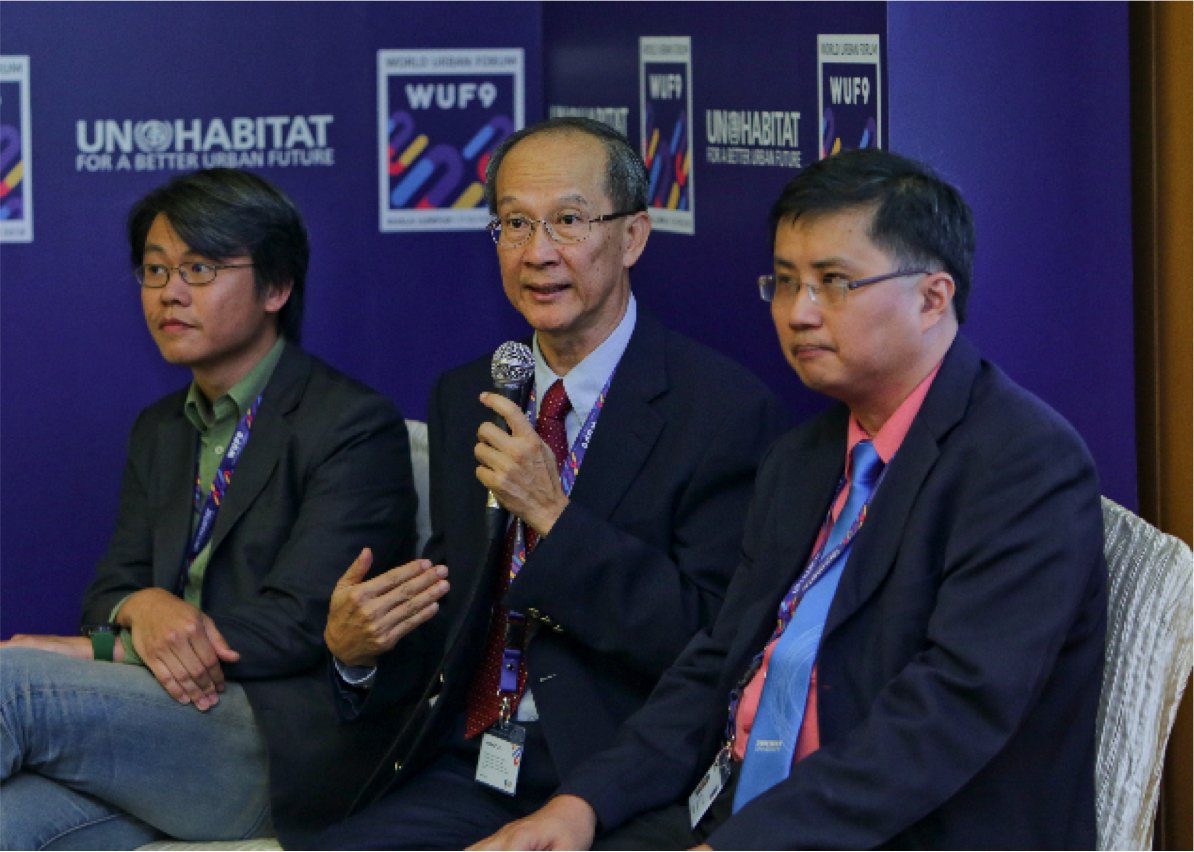 At Sunway Group’s networking session, Dr Fun Woh Peng spoke about on-going efforts within Sunway City to deploy solar energy thereby reducing dependence on the carbon-intensive national grid. He spoke of his work in exploring the use of solar power in ways that maximise capacity vis-à-vis demand in the most efficient manner, using Sunway City as a testing lab. He compared large scale solar to the latest technology in rooftop solar, and demonstrated with facts and figures how the latter is more feasible and efficient in the case of Sunway City. A similar system is being deployed extensively in South Australia, where the rooftops of houses and other buildings – incorporating both solar roofing and battery – form a massive interconnected power plant. While the same amount of investment roughly translates to the same amount of energy generated by both systems; the solar-batter combination has a significantly lower rate of power loss in transmission (2% vs 10%); is more stable; and does not require land, substations or new structures, thus also lowering operation and maintenance costs. He noted that private investment is critical to enable the eventual abandonment of a carbon intensive energy system, and there can be returns on investment in the long run.

Giving Voice to Older Persons in the Design of Cities

Dr. Clarissa Lee represented JSC at the Older Person’s Roundtable that was held to address the formal and informal barriers prevent older persons from being included in public consultations on urban planning, usually due to lack of mobility and accessibility, either online or in person. As a researcher on the “Imaginaging” project, she spoke of the urgency of mainstreaming issues pertaining to aging into every aspect of urbanization. Using participatory design as its qualitative research method, the project deals with issues of social isolation and physical and mental well being among older adults, and hopes to enable citizens and governments of developing countries to engage in policy agenda-setting on ageing well in the city. This novel project – a first of its kind in Malaysia – is a collaboration between Lancaster University, Sunway University and the United Nations University - International Institute for Global Health (UNU-IIGH).

Engaging Youth and Children to Draw Out Innovative Urban Ideas 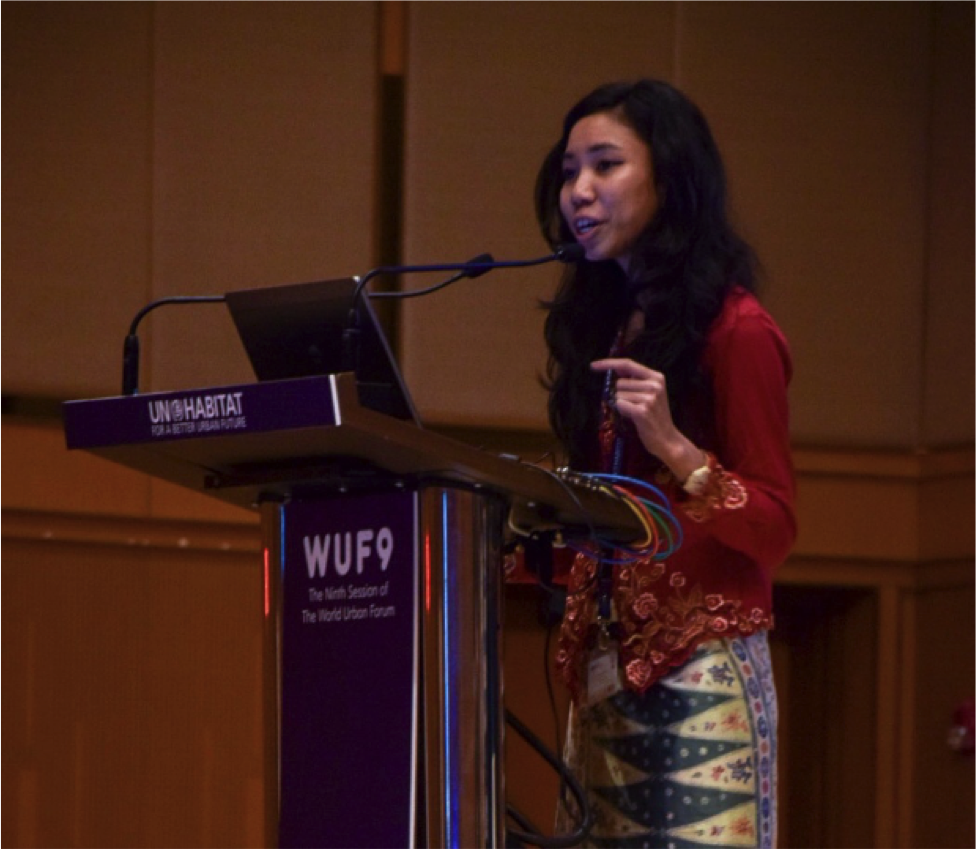 The Roundtable on Children and Youth provided a global platform for young people and their advocates to articulate emerging urban issues and innovative solutions impacting their lives and communities. Speaking as a representative of the Jeffrey Sachs Center as well as of the officially mandated Major Group for Children and Youth that was established under the United National General Assembly, Jasmin Irisha Jim Ilham gave an overview of the engagement of youth and children at the WUF9 and presented the inclusive urban ideas and solutions that emerged from those engagements. These included: developing diverse youth participation policies, guidelines and standards to guide governments, local authorities, civil society organisations and the private sector on how to include youth with different needs especially those with disabilities, young women, refugee youth and youth in conflict cities. Jasmin delivered the official declaration speech at the Children and Youth Roundtable as well as the Kuala Lumpur Declaration on Cities 2030 at the Closing Ceremony of WUF9 together with TV personality, Ras Adba Radzi.

The Children and Youth Roundtable and the Closing Ceremony were held on 12 and 13 February 2018 respectively at the Kuala Lumpur Convention Center.

Speaking at the GSIAC Smart Cities Alliance (GCSA) Networking Event organised by the Malaysian Industry-Government Group for High Technology (MIGHT), Andrew Fan, Senior Analyst at the Jeffrey Sachs Center, highlighted the importance of measurable indicators to facilitate evidence based policy making. He emphasised that the annual SDG Index has helped to provide focus on the major challenges the country faces to facilitate “deep dive” problem solving. For instance, the indicators point to the need for Malaysia to focus on addressing issues such as child stunting, the loss of biodiversity and the level of Co2 emissions. 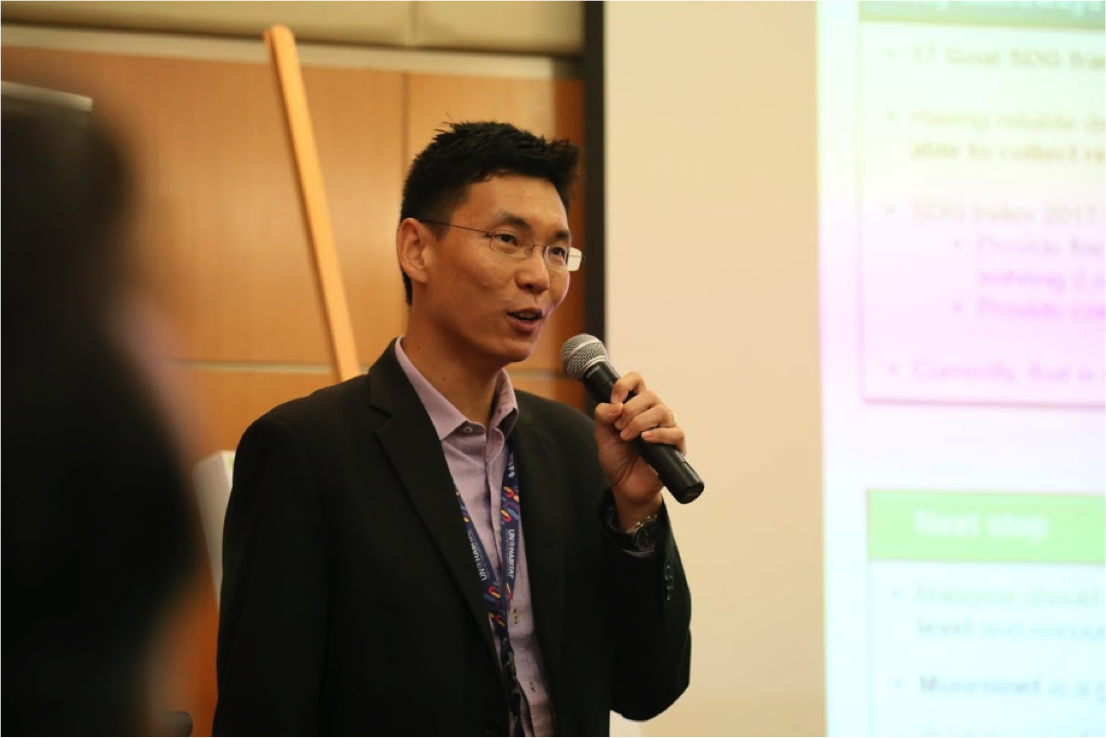 This event was held on 13 February 2018 at the Kuala Lumpur Convention Center.